In the distant future, the world has been ravaged by climate change and generations of genetically modified flora and fauna have begun to fight back. The remainder of the human population survive in walled villages, cut off from each other and forced back to a medieval way of life by fear of the trees, plants and animals that live outside the villages’ protective barriers. One such village is Mythen Rood, on the banks of the River Calder in what was once West Yorkshire. Here some two hundred people live under the government and protection of the Ramparts, people for whom ancient technology has awoken and provided the means for defence and knowledge – a flamethrower, a crossbow, the “database”. When Koli comes of age, like everyone in the village, he takes the test to see if he has what it takes to awaken technology. When he fails, he sneaks into the Ramparts’ storeroom and steals – and wakes – what looks like a small brick, and turns out to be a music player. For this crime, he is exiled from Mythen Rood, forced out into the dangerous world outside with nothing to protect him but his own wits and a healthy fear of the nature that surrounds him.

When it comes to post-apocalyptic fiction, Mike Carey has incredible form, completely reinventing the zombie novel in the wonderful The Girl with All the Gifts, and prequel/sequel/companion The Boy on the Bridge. With The Book of Koli, Carey turns away from thewell-trodden tropes of horror fiction and presents a vision of the future consistent with what the climate change advocates have been telling us for years: the planet will eventually fight back and the disease that is humanity will ultimately be wiped out. Carey introduces us to an England – and presumably a wider world – that has, for the most part, returned to the wild. Trees and animals have taken back what was once theirs, and the few remaining humans cluster together in walled villages, doing the best they can to survive, only venturing outside the safety of the villages when the trees are sedated – when the sun is hidden by banks of cloud, a state of affairs that makes this a quintessentially British novel, and makes northern England the perfect setting for Koli’s tale to unfold.

The Book of Koli is the first in a trilogy set to be released in quick succession before the end of this year. It feels very much like a first book, with a lot of scene-setting, and drawing the reader into this world that is at once so alien, and so familiar. Showing us the world from Koli’s point of view gives us time to settle in, getting to know this new world, while still spotting glimpses – of which Koli is oblivious – of the world we know now. The language has evolved into something that is still recognisable but subtly different from how English is spoken today, to provide enough comedy value when Koli meets Monono, the artificial intelligence that lives in his stolen technology. Carey’s world-building is second-to-none, a visual feast that rivals Vandermeer’s Area X, and sets up everything we need to know about this world for the coming adventures: the carnivorous tress, the mostly-defunct technology that Koli believes can change their lives, the different people who populate this small part of the world to which we have been exposed: cannibals and reavers, itinerant salespeople and healers, and many more.

Despite the abundance of setup, Carey still manages to thrill and entertain and, most importantly, surprise us as we follow Koli on his journey. This is a character that very quickly gets under our skin, and we find ourselves rooting for him from the outset: if anyone deserves more than their lot, Koli is that person, and when things start to go wrong – as is inevitable – we feel his pain, from losing his friends, to failing the test to become a Rampart, to the ultimate loss of home and family as he is sent outside the wall, exiled from the only home he has ever known, not because his crime was serious, but because of the implications for those in charge, the Ramparts who he has worshipped for as long as he can remember.

In these difficult times, many of us are struggling to read, and the fact that we are living in a Stephen King novel makes the prospect of diving into a post-apocalyptic world even more daunting. But The Book of Koli is pure escapism, however plausible the future it predicts. Koli quickly becomes a good friend, to the point that he will haunt the reader long after the book has finished, as we wait impatiently for the next instalment of his adventures. This friendship puts us the edge of our seats as we follow him through this strange new world: given the first-person narrative, we can be reasonably sure that he won’t meet a horrible end – at least not in the first book – but that doesn’t mean he’ll come out of the encounters he has completely unscathed. It’s a gripping, intense read with a great sense of humour and Carey has honed his craft carefully, so that he knows when best to ease the tension and when to ratchet it up for best effect. If ever there was an author who deserved the take on the mantle of the great John Wyndham, Mike Carey is that author, and The Book of Koli – like The Girl with All the Gifts – is sure of a place alongside The Day of the Triffids and The Kraken Wakes as some of the finest British apocalypses ever imagined. 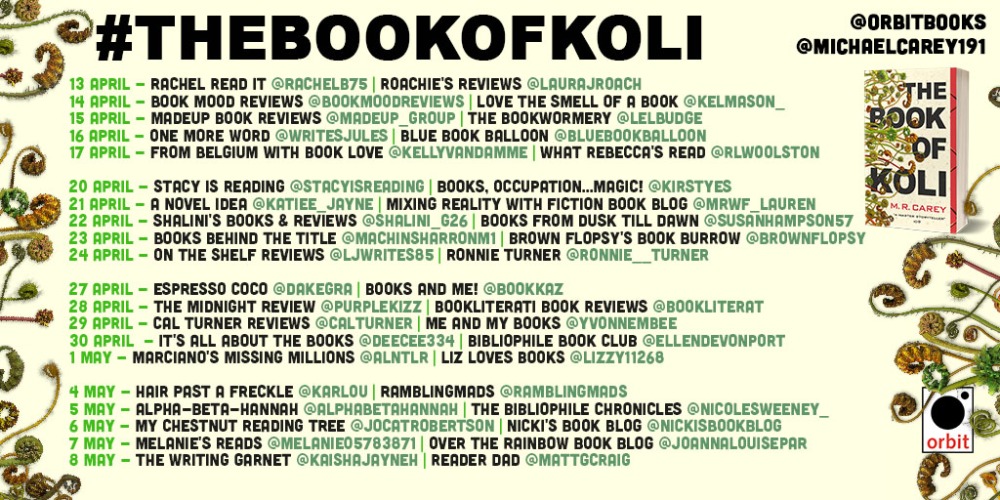