Carrie wasn’t the first Stephen King book that I read.  That honour goes to ‘Salem’s Lot, King’s second novel, which I must have read in the late seventies, or 1980 at the latest.  (I have a clear memory of a classmate in school pressing The Shining on me when I was still in sixth class, which means it was 1980, but I’d already read ‘Salem’s Lot by that point.  It is worrying that I can’t recall the birthdays of close friends, or even the exact date on which my father died, but I retain pinsharp images of a small boy giving me a Stephen King book.)  Anyway, I don’t think that I liked The Shining as much as ‘Salem’s Lot, mainly because it didn’t have enough vampires in it, and at that time – unlike these days, when you can’t chuck a stone without hitting one – vampires were in relatively scarce supply. 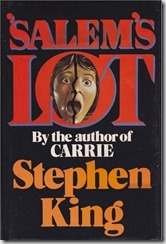 My first awareness of Carrie came from the film.  Obviously, I hadn’t seen it:  it came with a big ‘Cert X’ beside it in the cinema listings, and it would be many years before I saw my first 18+ movie.  (Porky’s, since you ask.  Yes, I’m sorry too.)  But what I mean is that, like Alien and The Exorcist, Carrie had impinged upon my consciousness long before I ever actually encountered it in book or film form.  I think, too, that something of that ‘X’ had cast a shadow over the whole business, because in Ireland the letter ‘X’ generally brought with it, by implication, two other letters, namely ‘S’ and ‘E’.  Dark rumours surrounded Carrie, whispers of nudity and periods.  Frankly, I wasn’t entirely sure that I was ready to deal with that kind of thing at ten or eleven. Vampires seemed more manageable.

So I can’t tell you when I read Carrie, other than that I did, and it was probably later in my King reading rather than earlier.  I faintly recall it as being structurally odder than the rest of his work, bringing with it a hint of reportage.  I think, by then, that I had also seen the film at last, certainly illicitly on VHS, and the book may have suffered somewhat by comparison.  The book, I think, bears some comparison with Stoker’s Dracula, at least in its slightly fractured narrative which intermingles newspaper reports with extracts ostensibly taken from non-fiction studies of the incidents recounted (The Shadow Exploded: Documented Facts and Specific Conclusions Derived from the Case of Carietta White by David R. Congress – Tulane University Press: 1981), and even pieces of graffiti (Carrie White eats shit).  It’s a mechanism which, in this case, doesn’t quite work, distancing the reader slightly from the action, although I can see why the young King used it in an effort to blur the lines between fact and fiction.  It is a young writer’s book, albeit a precociously talented young writer’s book.   It’s also lean and, games with structure apart, relatively unadorned.  It has its roots in short fiction, and by comparison with the massive tomes King would subsequently publish, almost qualifies as a novella.

Is Carrie a great novel?  I don’t think King would make that claim for it, but it is a good one.  It’s better than many others of its kind simply because King is arguably more prodigiously gifted that any other genre writer of his generation – or, indeed, of many generations – and was that way from the start.  By rescuing it from a trash can, Tabitha King set her husband on a path that has produced some of the most iconic pieces of horror writing ever published.  In other words, Carrie marks the beginning, and for that we should always be grateful. 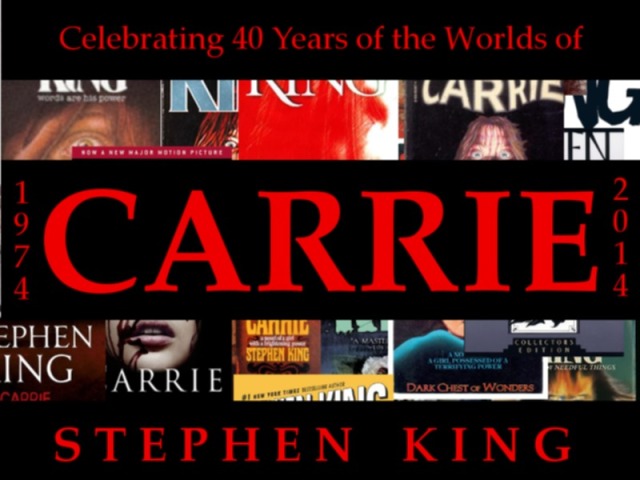 John Connolly was born in Dublin, Ireland in 1968 and has, at various points in his life, worked as a journalist, a barman, a local government official, a waiter and a dogsbody at Harrods department store in London. He studied English in Trinity College, Dublin and journalism at Dublin City University, subsequently spending five years working as a freelance journalist for The Irish Times newspaper, to which he continues to contribute.

He is the author of the Charlie Parker series of novels, the Samuel Johnson trilogy and a number of standalone books. His new novel, The Wolf in Winter, is the latest to feature private detective Charlie Parker, and is available in hardback from this week.