If stories are a way of finding a start point and an end point in something that has no framework, then post-apocalyptic fiction promises the big full stop more than any other genre. But I’ve always thought it rarely brings itself to deliver on that promise. There’s always hope, isn’t there? The Road gives us the boy and Blindness eventually lifts the dark. The world as we know it ends, but a new one starts to emerge through the rubble; we see it poking out its shoots in the final pages of most post-apocalyptic novels. 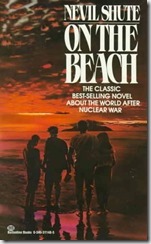 Well, you don’t get that in On The Beach. First published in 1957, it’s about the last people left alive after an exchange of nuclear weapons that irradiates the planet. Winds are carrying radiation to these final survivors, in Melbourne, Australia, and they know it. It creeps a little closer on every page.

US Submarine Captain Dwight Towers meets an Australian Commander, Peter Holmes, and is invited to weekend party. Peter has a wife, Mary, and a baby girl. His wife’s friend, Moira, attends the party too, and the plot follows the four adults living out their last months without much fuss. Quiet conversations take place, and the nature of their group relationship changes.

Why is it considered less truthful to imagine that people would cling to order in such a situation? Shute’s novel, much like the science fiction novels of other writers of the 1950s such as John Wyndham and John Christopher, imagined that in catastrophic situations people organise themselves and attempt to find structure. That doesn’t seem particularly old-fashioned to me. Rules are made and roles assigned – written, spoken, or sometimes never discussed at all – and the drawn-out goodbye at the heart of On The Beach comes with good manners, maybe because that is simply easier when the adrenaline has faded.

I think my favourite moment in the novel happens between the two women, Mary and Moira. Mary is generally sheltered from life by her husband, but he has been sent away on military business. He has tried to explain to her that she might have to accept the responsibility of killing their baby girl to spare her from radiation sickness, and she has refused to listen. But as she sits with Moira, drinking brandy late into the night, she suddenly faces the situation. She asks Moira to help her kill the baby when the time comes. Moira holds her hand, and agrees. The responsibilities shift without great fanfare. Although Shute quotes TS Eliot at the beginning of the novel, it’s Yeats that I remember in their conversation. A terrible beauty is born.

When I came to write my own post-apocalyptic novella, The Beauty, it was that element I wanted to draw on – the group with no hope, but that had not given into hopelessness. The End is a concept that fascinates us all, in stories and in life, but it does not have to come in pain and fear. It can come in quiet words, in a sudden acceptance of what needs to be done and who we need to be. In On The Beach it comes with the acknowledgement that killing the baby might be the most humane thing you ever do, even as it means the end of humanity.

One thought on “INFLUENCES: Nevil Shute’s ON THE BEACH by ALIYA WHITELEY”