I fled the city: Two fingers short and sworn off dames for life.

Hammond is on the run; after a serious beating by the latest in a long line of cuckolds, he is two fingers short, and with a man’s death on his almost non-existent conscience. Buying a bus ticket, he ends up in the bayous of Louisiana, where he takes a job playing the piano at Horace Croker’s ramshackle bar, The Grinnin’ Gator. When he falls for Croker’s beautiful, abused wife, the pair hatch a plan to escape, taking the man’s money with them. But there’s a complication, in the form of Big George, a massive alligator who Croker keeps in the swampy pool below his bar: a pair of missing fingers might be the least of Hammond’s worries before he gets out of this.

It’s an ageless story that we’ve read – or watched – many times before: the abused wife, the drifter, the husband with money hidden away. What makes Gator Bait worth reading is the style with which Howe tells the story, and the magnetism of the characters at the story’s core. With spare yet beautiful language, the author tells his story of lust and violence, grabbing the reader by the throat and leaving them breathless by the story’s chilling climax.

The Postman Always Rings Twice with teeth, Gator Bait follows a similar formula to James M. Cain’s classic novel. Hammond, who calls himself John Smith when he arrives at The Grinnin’ Gator, is not a particularly likeable man, but he’s morally questionable at best, in contrast to the pure evil of Croker, a man who likes to feed Big George with people who cross him, and who keeps a cartoon – from which the story takes its name – on the wall of his office that defines his very character:

…it depicted a jolly old fisherman, bearded and fat as a hillbilly Santa Claus, casting his line into the river. Baited on the hook was a Negro child, caricatured to resemble a monkey…The painting was titled ‘Gator Bait’. I shuddered to recall what Croker had said about “the right bait.”

Hammond’s first-person narrative is perfectly-judged, the kind of voice we expect to find in this type of noir tale, while the tale itself is a wonderful mix of old-fashioned noir fiction and horror of the most banal kind – by which I mean there’s nothing supernatural here, but Croker’s actions, and Howe’s descriptive talents provide enough chills to keep the most jaded horror fiction fan happy for the story’s duration. While Grace – Croker’s wife – seems decidedly one-dimensional, it suits Howe’s purpose, keeping our attention focused on the building tension between Hammond and Croker, and on the ever-present threat of Big George. 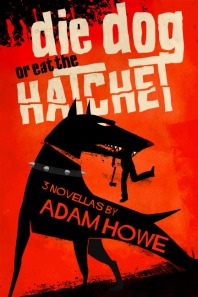 Adam Howe is slowly building his reputation as an author of fine dark fiction. His trilogy of weird tales, Black Cat Mojo, has already garnered rave reviews and Gator Bait will form one-third of his second collection, Die Dog or Eat the Hatchet, which is released on 3rd November from Comet Press. Heavy on style without sacrificing the substance, Gator Bait is the perfect teaser for what Howe is capable of and leaves the reader wanting more. While the novella form seems to suit his storytelling style – and the types of tale he wishes to tell – here’s one reader who would love to see him tackle a novel, a form that is more likely to see his work hitting the mainstream – where it certainly deserves to be – than the shorter works.

A blackly-comic noir tale that is infused with a sense of growing horror, Gator Bait is the perfect way to spend a dark evening reading. Chilling and unsettling, it is clear that Adam Howe knows exactly what buttons to press to manipulate his audience. I’ve already mentioned Cain’s Postman: Gator Bait is perfect for fans of that classic and shows that Howe has the chops to compete with some of the biggest names in the industry. Don’t be put off by his small-press origins: this is a talent that can only stay hidden for so long and an author that we’re likely to be talking about much more in the very near future. Get on at the ground floor; I can guarantee you won’t regret it.