Angela Slatter is an award-winning short story writer with the World Fantasy Award, the British Fantasy Award and five Aurealis Awards to her name. Vigil is her first novel, introducing the world to Verity Fassbinder and the weird (and, indeed, Weyrd) happenings in Brisbane.

Thank you, Angela, for taking the time to chat with us.

Thanks for having me on the blog! 🙂

When Vigil opens, we find ourselves introduced to the central character, Verity Fassbinder, as if in passing. There is a sense of a huge and storied history here, only some of which is revealed as the plot proceeds. She is an intriguing character and the reader comes away with the impression that this is not the first of her adventures that she has recounted. Has Verity appeared in your fiction before, or will you be revisiting earlier adventures as the series progresses?

Verity started out in a short story called “Brisneyland by Night”. There’s also a story called “Here Today” that I wrote for a project called The 24-Hour Book for if:book Australia. When I wrote Vigil I incorporated a lot of that first short story into the plot. I feel like there’s still a lot of iceberg underneath as far as her back story is concerned and I hope to get the opportunity to plumb it at some stage! Some more of her family history will come out in Corpselight and Restoration.

With the exception of a kind of super-strength inherited from her Weyrd father, Verity seems relatively normal (or Normal). At heart, the book feels like a hard-boiled detective novel, with Verity playing the role of Sam Spade or Phillip Marlowe. How easy was it to find her voice, and did you set out to write urban fantasy with a hint of crime, or crime with a hint of urban fantasy?

I set out to write a short story that was inflected by that hard-boiled/noirish tone … I was at Clarion South and wrote “Brisneyland by Night”, which eventually became the novel Vigil. But I was aware that hard-boiled is done a lot. I mean, a lot. And I wanted to add differences to the story, so what makes the crime different? Add the urban fantasy element, make your antagonists mythical/biblical/fairy-tale, etc. And make your protagonist not someone with nothing in her life, no bitter divorce, hard-drinking, hard-smoking PI, but a fairly practical woman just trying to get on with life and her job. Just trying to balance a normal life with a Weyrd job.

One of the central characters in the novel is the city of Brisbane itself. To most of the Northern Hemisphere, it’s little more than a dot on a map. How did you go about bringing the city to life, and infusing it with the sense of strange that seems to define it within Vigil?

I suppose it’s about thinking on all of the stuff that’s struck me a wonderful or strange or annoying about the city over the years and framing that for someone who doesn’t know the place. Rolling it into a joke (like the stuff about the restaurants closing early − alas, not actually a joke) and presenting it so someone understands what you’re saying, making it relatable. Also, lying! Making things up − like the tunnels under the city. There are some old sewer tunnels around, one of them is in fact preserved in the King George Square Bus Station (the Wheat Creek Culvert), but it’s about imagining more and making your lies convincing and interesting. About presenting the city as a slightly different thing to what it is, showing it the way it might be if all the “what if?” questions were answered! 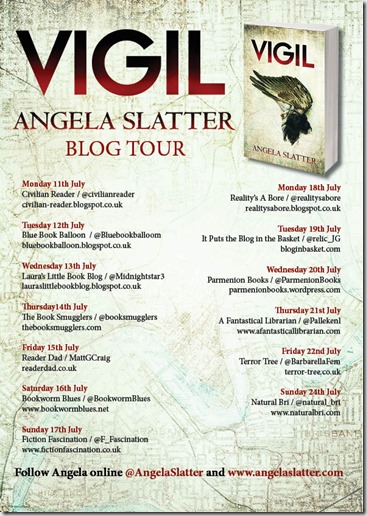 The Weyrd is a mish-mash of different mythologies and legends, but you’ve eschewed the more obvious faeries and goblins for more obscure creatures: sirens with feathers rather than scales, angels and various other creatures of a hundred different underworlds. How much research was involved in the creation of the world and its inhabitants and how did you make sure you kept everything grounded in something resembling reality?

I have always been a huge reader and researcher of mythology and fables, legends, fairy and folk tales, and general weird stuff and I wanted the Weyrd to be a catch-all for that. There’s a lot of information floating around in my head that’s been stashed there for years, and it’s just waiting to be used. I want the Verity stories to have that sense of there is no reigning or privileged mythology, that we are all in this world and we’ve all got our beliefs, but no one path is right or exclusive, that there are all of these mythical creatures pushing up against each other, that the worlds bleed into each other; that we’re all in a crowded elevator together, hoping the cables don’t break.

But I really do need to start my own Weyrd Bestiary to keep things straight in my head. Kathleen Jennings should illustrate it!

You’re currently working on the second book in the series, Corpselight. Can you tell us anything about it, and what we should expect, given the game-changer that closes Vigil?

Hmmmm, difficult to avoid spoilers. Let’s just say that Verity’s got a couple more challenges on the way and a lot of dark secrets from her family’s past − mostly her father’s side − coming back to haunt her. I sort of like having her trying to manage an ordinary life alongside all of these things she just can’t control … a metaphor for existence, I guess.

And do you have a longer-term view of where the story is going, with a definite end-point, or is the plan to take it one book at a time?

I know where the first trilogy arc is going, so yes, that’s all planned. I have a second trilogy very vaguely plotted, but whether that sees the light of day will depend on the success of Vigil, Corpselight and Restoration.

What authors or works have influenced you as a writer?

And as a follow-on, is there one book (or more than one) that you wish you had written?

Not really. That’s kind of a non-question for me − I love those books because they’re uniquely someone else’s voice, so if I’d written them they wouldn’t be someone else’s … that’s the appeal of another writer’s fiction, that it is so different from your own.

What does a typical (writing) day in the life of Angela Slatter look like?

I work from home, so it’s easy to get to the office, and because I work from home I need to be very aware of behaving as if I’m in an office. So I start at 8.30am have lunch between 1-2pm, finish work at 5.30pm. Anything after that is a bonus − as my main publishers are in either the US or the UK I tend to deal with their email correspondence late at night.

I check my emails first, prioritise them, then I check over my to-do list and make sure there are no deadlines hurtling towards me … or rather, I check which deadlines are hurtling towards me, and then I prioritise tasks for the day. At the moment, I’m doing the edits on the sequel to Vigil, Corpselight, and finishing up the plotting framework for the third book in the series, Restoration; I’ve got two short stories due by the end of July; the Vigil launch is happening on 19 July so preparing for that; waiting on proofs of a new UK collection; editing the third and final Sourdough book; plotting a series of three novellas to pitch somewhere … those are the top priorities. I’m heading to the UK in August for Nine Worlds, a gig in Newcastle at Novocastria Macabre with Robert Shearman, and the inaugural Dublin Ghost Story Festival, so I need to get a lot of things out of the way before travelling.

And what advice would you have for people hoping to pursue fiction-writing as a career?

My standard reply to that is:

· Learn your craft and never, ever think you know it all.

· Develop a thick skin, but realise that story criticism is aimed at making the story better, not at making you feel bad about yourself. Find people whose opinions you respect and trust.

· Remember: it’s always better to have someone find problems with a story before you send it out into the world.

· Networking is about building mutually beneficial relationships with other writers and publishers, not just about you getting what you can.

· Don’t send Facebook friend requests to other writers and then ask them to like your page and buy your book: (a) it’s just rude, and (b) other writers are not generally your audience. That’s my personal bugbear!

What are you reading now, and is it for business or pleasure?

I am reading Stephen Gallagher’s Kingdom of Bones, Barbara Hambly’s Those Who Hunt The Night (again, it’s a frequent comfort re-read), Kameron Hurley’s The Geek Feminist Revolution, and in the queue I’ve got China Miéville’s The Census Taker, Zen Cho’s Sorcerer to the Crown, Rjurick Davidson’s The Stars Askew, and Jeffrey Ford’s A Natural History of Hell.

If Vigil, or indeed, the Verity Fassbinder series as a whole, should ever make the jump from page to screen, do you have any dream casts/directors/whatever?

There are a lot of these questions about, and I suppose in today’s world it’s a natural kind of correlation − once it was just a dream you kept to yourself, nowadays it’s an actual slim possibility. I still don’t know about Verity and have been wracking my brain on that one. You need a mostly Australian cast to make it work properly. For my sirens, I’d love Elizabeth Debicki as Serena, Cate Blanchett as Eurycleia, Robyn Nevin as Ligeia. Chris Hemsworth might well work for Tobit (must have hair dyed), Stellan Skarsgård as Ziggi, and I’m still tossing up between Michael Fassbender or Eric Bana for Bela. Oh, and the Norns … must think about that …

And finally, on a lighter note…

If you could meet any writer (dead or alive) over the beverage of your choice for a chat, who would it be, and what would you talk about (and which beverage might be best suited)?

Haha! Angela Carter. I think she would probably drink tea. I would go for coffee. We might look at each other with vague disapproval until we realised we should probably just have a whiskey and all would be well.

Thank you once again, Angela, for taking time out to share your thoughts.