On a late November night in 2014, a young woman bludgeons her family to death with a hammer. While she never denied the killings, her talk of letting black-eyed children into the house as a precursor to the massacre means that Arla Macleod was sentenced to a medium-security hospital due to diminished responsibility. Now, Scott King, creator of the popular Six Stories podcast, has set his sights on the Macleod Massacre, examining Arla’s story from six different points of view. But it isn’t long before Scott is receiving anonymous threats telling him to leave the story alone, and the more people he talks to, the less sure he is that Arla’s demons are entirely imaginary.

Matt Wesolowski’s debut novel, Six Stories, is one of my favourite novels from 2017, and one of the most original pieces of crime fiction to appear for quite some time. Modelled on the hugely-popular podcast Serial, the story casts Scott King as an amateur sleuth who uses his podcast to delve into cold cases in the hope that he might shake something loose. Everything about Six Stories is perfect, from Scott’s detached voice, to the pacing, to the completely unexpected climax. So, it’s with some trepidation that I cracked the spine of Wesolowski’s follow-up, Hydra, marketed as “An Episode of Six Stories”; there are a lot of reasons for excitement at revisiting this world, but there’s also a certain amount of trepidation that the podcast idea might be little more than a one-trick pony.

Fear not, Six Stories fans. Wesolowski has this very much under control.

The nature of the story, and of Arla Macleod’s backstory, allow the author to play around with horror tropes a little bit more than was possible in the first novel; more so than ever, the reader spends much of the narrative wondering if this is, in fact, going to turn out to have a supernatural explanation. From the black-eyed kids, stalwarts of British tabloid front pages, to the kind of J-horror tropes made popular by The Ring and Dark Water, Wesolowski plunges the reader into a world of darkness and dread, leaving the well-worn pathways of conventional crime and giving us more than enough cause to wonder not only whodunnit but whatdunnit.

The strength of Wesolowski’s storytelling lies not only in his ability to drip-feed the information we need throughout the course of the novel, but in his ability to provide each of his central characters with a unique and instantly-recognisable voice. As with its predecessor, Hydra presents the story of the crime from six different points of view, with each chapter representing an episode of the podcast, and each episode representing a single interviewee’s story. We are guided through the podcasts by presenter Scott King, which allows a further narrative to be inserted, that of the anonymous threats, which slowly unfolds across the six-week duration of the podcast. The supernatural element that lingers constantly in the background – and in the back of the reader’s mind – combine with this storyline to give the reader an unsettling, though very satisfying, experience throughout.

There are issues with the continued use of this format: most notably that the podcasts are produced on a week-by-week basis with no clear outcome when the first episode goes live and often, as King points out, no clear idea of how he will be filling the remaining five weeks. It’s difficult to maintain the illusion of a neat solution in series after series under these conditions, but this may provide Wesolowski with plenty of fodder for future episodes should he decide to continue following King’s investigations. After the first novel, I was keen to hear an audio version presented in a podcast style. After this one, I can’t be the only reader who’d be interested in a Six Stories novel on a Green Mile release schedule, with the same constraints that King set himself for his first real foray into the serial novel.

In all, though, Hydra lives up to the expectations set by its excellent predecessor, and is as inscrutable and unexpected as readers of Six Stories will expect. Matt Wesolowski’s second novel builds on the strengths of his debut, and proves that this young writer has plenty of talent to burn. Accomplished, intelligent and incredibly well-written Hydra cements Wesolowski’s place as a writer to watch, especially if you’re looking for authors who aren’t constrained by genre boundaries. Hydra should be top of your list of books to read early this year, and if you haven’t yet read Six Stories, then you have some serious catching up to do. 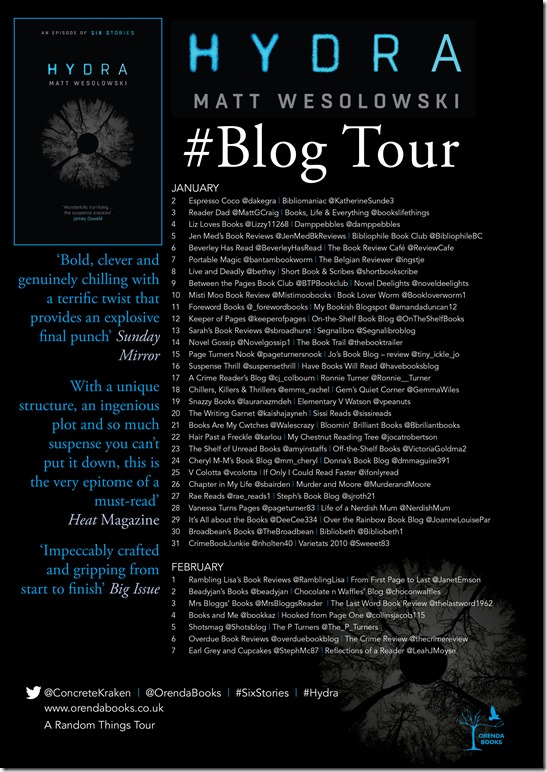 One thought on “HYDRA by Matt Wesolowski”