After almost thirty years, Joseph Thorne returns to the Nottinghamshire town of Arnhill to take up a teaching position at the local academy. There’s more than the promise of employment that brings Joe back home: when he was a teenager, his eight-year-old sister disappeared for forty-eight hours. When she came back, she wasn’t the same Annie that disappeared. Joe has been receiving worrying messages that history seems to be repeating itself, and is returning home to face his demons, and to make sure that no-one else has to face whatever it is that came back disguised as his sister. Little has changed in Arnhill, and Joe finds himself locking horns with some of the hard men he used to hang around with, and who are now bigshots in the local community. But Joe has enough evidence to ruin reputations that have taken a lifetime to build, and he’s in debt to some very serious people who are slowly but surely running out of patience.

C.J. Tudor’s debut novel, The Chalk Man, was one of my favourite books of 2018. When I started reading The Taking of Annie Thorne (known as The Hiding Place in the US), it was with some trepidation, since the setup here feels very similar to Tudor’s first book: the return to a small town where the protagonist grew up, flashbacks to a time when he was a teenager, and the sinister vibe that keeps the readers on their toes. Never fear: while the setup is the same, the plot takes off in a completely different direction, and you’ll be glued to the page from the end of the gut-twisting prologue.

Joseph Thorne is a troubled man with a past. A gambling addict, he is in serious debt to serious people, and sees his return to Arnhill as a chance to escape briefly, get his head together, and potentially earn enough money to take him out of the red. But Joe also has something of a history with the small town of Arnhill: this is where he grew up; Arnhill Academy – the school where he now teaches English, following the gruesome death of the previous English teacher and her young son – is where he studied, and where he spent his formative years in the company of his friends, amongst them Stephen Hurst who is now on the local council, as well as being chairman of Arnhill Academy’s board of directors. It doesn’t take long for Joe to realise that Hurst is still the bully he has always been, and that his tenure at the academy is likely to be short-lived.

The action moves between present day and late summer 1992, the year Joe’s younger sister disappeared. As the story progresses, we learn that this may be an oversimplification of the truth. Or rather, a version of the truth that Joe tells himself, perhaps to salve his own guilt at what happened to eight-year-old Annie. The truth of her disappearance is more horrifying than Joe (and indeed the book’s title) might lead us to expect, and Tudor strays into the realms of the supernatural as the events of that fateful summer come to a horrific climax.

It’s difficult not to talk about C.J. Tudor’s work without mentioning the obvious influence that Stephen King has on her work. The Chalk Man is an exceptional novel, and one that is heavily influenced by It. The Taking of Annie Thorne pays homage to King’s Pet Sematary (although readers will be pleased to hear that no cats were harmed in the making of this novel), replacing the Indian tribe with an ancient druidic civilisation and transplanting the horror to the English Midlands. Around this homage, Tudor has created a normal, believable world, peopled by normal, identifiable characters, from the troubled Joe Thorne, to his fellow teachers, the obnoxious Hurst, and Gloria, the pint-sized blonde bombshell with a penchant for torture and murder.

The story slowly unfolds through a series of flashbacks, slowly revealing all we need to know to understand why Joe has returned. What should have been a simple case of blackmail suddenly becomes something much more horrific when Joe realises that his sister probably wasn’t the only child taken by whatever dwells in the mysterious chamber under the coalmine. Tudor’s writing is exceptional, the perfect balance of darkness and humour that keeps the tension ratcheted while still allowing the reader some breathing space. Her characters, while never exactly likeable, are very real and leave us with the impression that we’ve met them before, or we know someone exactly like them.

It’s difficult to pick up a sophomore novel with anything other than trepidation when the author’s debut was so good. The Taking of Annie Thorne more than delivers on the promise of The Chalk Man and cements C.J. Tudor’s reputation as one of the finest young genre writers of her generation. This is a novel that defies genre boundaries – is it crime? Is it horror? Is it some strange hybrid of the two? – and is already one of my favourite novels of 2019. This is fiction at its best: entertaining and gripping, and just dark enough to leave the reader feeling uncomfortable throughout. C.J. Tudor is an author not to be missed, and her second novel is – difficult as it may be to believe – even better than her first. I, for one, can’t wait for her third! 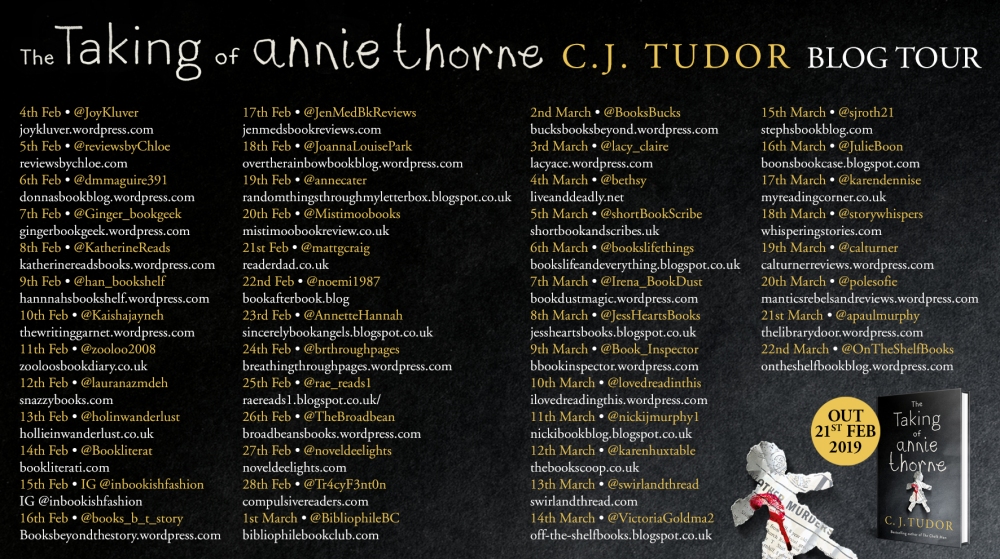 One thought on “THE TAKING OF ANNIE THORNE by C.J. Tudor”