Celebrated child psychiatrist Kate Wolfe is still reeling from the suicide of one of her more stable patients when a new young girl is abandoned at the hospital where she works. It doesn’t take long for Kate to work out that this new girl is related to the man currently sitting on death row, awaiting punishment for the murder of Kate’s younger sister, Savannah, sixteen years earlier, and that the girl’s mother has an ulterior motive: she wants to convince Kate of her uncle’s innocence in the hope that Kate will appeal to the governor for clemency. When Kate meets Palmer Dyson, a retired detective who worked on her sister’s case, she becomes convinced that the man who was arrested had nothing to do with Savannah’s murder, and that her sister was the victim of a serial killer who is still on the loose, and who may well have Kate in his sights.

Alice Blanchard’s latest novel, A Breath After Drowning is a psychological thriller that packs a powerful emotional punch. Within the first handful of pages, a fourteen-year-old girl in Dr Kate Wolfe’s care has committed suicide, and Dr Wolfe finds herself facing potential lawsuits and recriminations as she tries to come to terms with the death of a girl who seemed to be moving in the right direction. When we learn of the death of Kate’s younger sister when they were children, it becomes clear that this young girl’s suicide is likely to have hit her much harder than it might otherwise have done.

The man arrested for killing Kate’s sister used to live next door, and is currently less than a week away from an appointment with the lethal injection. Kate has had many requests over the years to lend her voice to the campaign to re-open the case and prove Henry Blackwood’s innocence, but now she is directly approached by Blackwood’s family in the form of his niece, who has some compelling evidence that proves Henry couldn’t have killed her sister. When she speaks to the condemned man himself, Kate begins to have doubts, and when retired detective Palmer Dyson presents his own case, she becomes convinced that the wrong man is sitting on death row. From here, it’s a race against time to find the real killer before he finds Kate.

Kate Wolfe is an excellent and engaging central character in this excellent, fast-paced thriller that is not at all what you might expect from the book’s cover or blurb. Excellent at her job, Kate still harbours a lot of guilt about her sister’s death, since Savannah disappeared when Kate was supposed to be watching her. Blanchard pulls no punches in an attempt to evoke an emotional reaction not only from Kate, but from the reader as well. The death of fourteen-year-old Nikki McCormack weighs heavily on her mind, while her interactions with Henry Blackwood are tense but enlightening, a portrait of a man who has made his peace with his final destination despite the fact that he is innocent of the crime for which he was convicted.

Kate is surrounded by an excellent supporting cast, from her boyfriend James who works as an adult psychiatrist, to her semi-estranged father and the old detective who takes her under his wing as she begins to understand the truth about her sister’s murder and her mother’s suicide. Blanchard’s strength, though, seems to be in the pacing and plotting of this complex novel, which is designed to grip the reader from page one, and not let them go until the very end: this is a book that could very easily be read in a single sitting, and Blanchard knows just how to keep her readers turning the pages.

Intricately plotted and gripping, A Breath After Drowning is brought to life by the characters at its core. An examination of guilt and the result of violence on families, it’s a breath-taking edge-of-the-seat thriller that keeps the reader on their toes, trying to out-guess the clever twists that propel the story along at breakneck speed. Not to be missed, this latest novel puts Alice Blanchard firmly on the must-watch list. 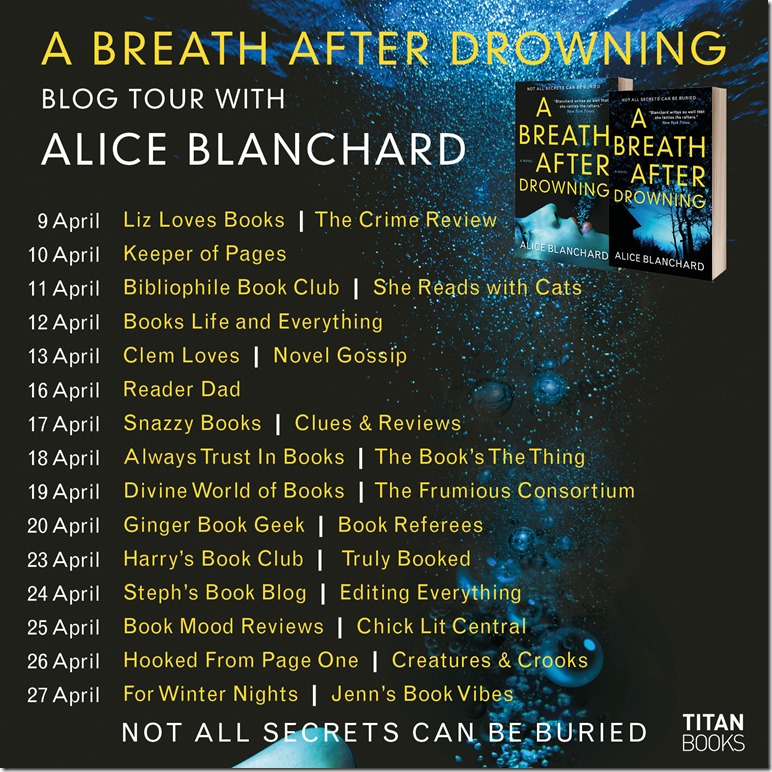