Leo Stanhope works as a coroner’s assistant, spending his days writing reports and sewing up the autopsied bodies of the dead. Madly in love with Maria, he longs for the day when they can be together, for the day when she can leave the brothel where she earns her living and devote herself entirely to him. When Maria is murdered, Leo becomes the prime suspect, and suddenly finds himself friendless and jobless in 1880 London, determined to uncover the identity of Maria’s killer, to ensure that justice is done, and to save himself from the hangman’s noose. But the noose might be the least of Leo’s worries: born Charlotte, Leo is breaking the law every time he steps out of his house and if his secret is discovered he’ll face a fate a lot worse than the quick death promised by the hangman.

The House on Half Moon Street introduces us to young Mr Stanhope and to the dark underbelly of London in 1880. Wonderfully evoking the smog-filled city and the often seedy characters who inhabit it, Alex Reeve uses Stanhope’s unique circumstances to examine the morality of a period where some crimes seemed more acceptable than others.

At the centre of the story is Stanhope himself, a young man hiding a secret: born Lottie, Leo fled the family home and the conservative views of his cleric father to find his own identity and make a life for himself far from anyone who might have known him in the past. Stanhope has necessarily revealed his secret to a select few people, and we find a range of reactions from acceptance (from his beloved Maria) to denial (interestingly from the people who know him best: his brother and sister). The conservative morals of the time period see Leo as a criminal, someone who breaks the law each time he leaves the house in men’s clothing. Yet the same moral compass seems strangely absent around murder and human trafficking.

When the prostitute that he loves is murdered, Leo necessarily finds himself playing the role of amateur sleuth, as he attempts to get to the bottom of her death. What is already a tense situation – Leo is initially considered prime suspect in the death, though is later freed due to influence from someone much higher up the food chain than he – is made more so by Leo’s situation: the slightest slip could reveal his secret and see him consigned to the lunatic asylum or prison. Leo finds himself allied with the widow of a man who seems to have been killed by the same person that killed Maria, against a cast of miscreants of every size and shape, from the respectable businessman who secretly runs half the brothels in the city, and who is behind a sex trafficking business that sees young women transported from London to Brussels, to the brothel madam who has ideas above her station, and the weasel-faced man whose allegiance is questionable, but who is no less scary for it.

Alex Reeve’s debut novel is a cleverly-constructed puzzle that examines issues that are still relevant today through the lens of Victorian England. Leo Stanhope is an exceptionally likeable character for whom we find ourselves rooting from the outset. While it has a decidedly dark perspective, there is a heart of wit and charm to The House on Half Moon Street that makes it not only enjoyable, but memorable as well. It’s a gripping story that captures the imagination of the reader from the first page and holds them captive until the very last word. This is, of course, helped along immensely by the promise of further adventures of this amateur detective with a unique selling point. We will, I suspect, be hearing a lot more about Mr Reeve and Mr Stanhope in the near future. Now is the perfect time to get involved. 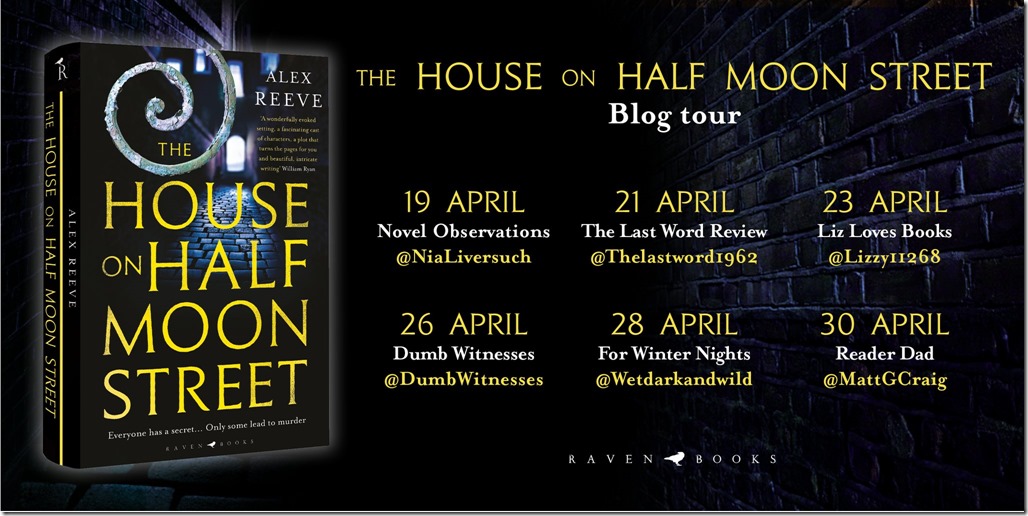